Well it only took about 40 hours, but I finally got all of the endings for the Steins;Gate 0 VN. There were a lot of laughs and a lot of tears to get here, but in the end I knew it was the choice of Steins Gate!

For this review I’m going to assume you already have some knowledge about the workings of Visual Novels (although I apparently have a lot to learn xP), so I’m mostly just going to rate it based on my experiences. I’d also like to disclose that while I have played the original Steins;Gate VN, I’ve only unlocked Mayuri’s ending which I agree with the general consensus is not a great ending. I’ll rectify that mistake in the near future!

And of course, spoilers ahead!

Steins;Gate 0 takes place in an alternative future after the original Steins;Gate‘s ending, and is set in Akihabara, Tokyo. It follows several characters, including the university student Rintaro Okabe, who, together with his friends Mayuri Shiina, the neuroscientist Kurisu Makise and the hacker Itaru “Daru” Hashida, accidentally have discovered time travel through the use of a microwave oven and a phone – the PhoneWave – which they used to send text messages and digitized memory data back in time. The latter, referred to as “time leaping”, essentially transports a person’s mind to their body at an earlier point. This has drawn the attention of SERN, an organization that secretly researches time travel, who sent their team of “Rounders” to confiscate the time machine, including the journalist Moeka Kiryu, killing Mayuri in the process.

Within the game world, time consists of alternative histories (“world lines”) that branch and re-merge, meaning that events at converging points are destined to happen unless events in the past are changed enough for them to lead to a history so significantly different that it belongs to another cluster of world lines (an “attractor field”) with different converging points. One such converging point is Mayuri’s death in 2010; to prevent it, Okabe went back in time and caused the shift from the alpha attractor field to beta, where Kurisu was killed and time travel was not discovered. Between the alpha and beta attractor fields lies the “Steins Gate” world line, which is unaffected by their convergence points. Some people can retain memories from the previous world line after a shift, an ability Okabe possesses and calls “Reading Steiner”.

Now since this is my first review of a VN, I’m not quite sure what the best way to go about it is. I’ve decided I’d like to review each route separately instead of the story as a whole since they all left different impressions on me. Think of it like reviewing an anime by it’s different arcs and seasons instead of the title as a whole. And of course since my initial goal when acquiring the English translation of this game was to finish it before the anime finished, I played the most efficient routes first. Heads up I’ll also be spoiling which flags you must trigger for each of these endings, so if you want to go into S;G 0 blind you might want to stop here! You can also find the list I used for these endings here!

Did you know Rinascimento is the Italian word for Renaissance? I sure didn’t, but I’m happy to have found out! This was the first route I played for two reasons. First, I love our tsundere Kurisu more than most best girls across the anime medium as a whole. Second, it’s necessary to complete this route first to get the True Ending on your second play-through.

This route struck me as kind of slow in the beginning because the first flag seemed a little lackluster. Granted it would’ve felt that way regardless of the choice I’d made, but compared to some of the other routes the story felt slow up to this part. However one thing I absolutely loved about this route was how drastically different it was from most of the anime adaptation to this point (yes I know it comes in later). I wasn’t aware of the reason during this play-through, but the anime is actually based on somewhat of a mixture of all of the stories. Anyway, as with most of the routes, the story really picks up once you’ve cleared all the flags. Okarin is sent to the year 2036, 11 years after he was supposed to have died, and learns that the world had been deceived into believing he was dead. Well in a sense he was, since he’d been tortured to the point his brain was about as good as mush. It’s through this timeline that he gets his first hint about how to deceive himself in 2010, and by making around 3,000 time leaps into the past we get to see Hououin Kyouma‘s revival.

Personally while this route alone doesn’t lead to the True Ending it was still probably my favorite ending. There’s nothing quite like seeing the return of Kyouma for the first time to really tear at those heart strings.

Ah a title most fitting for Mayuri or by her Valkyrie handle Stardust Handshake. The story of Vega and Altair reflects her love for Okarin and the Tanabata festival centered around the deities Orihime and Hikoboshi, whom they’re often compared to. This route must be completed after The Promised Rinascimento and the credits watched without skipping to see the True Ending: Milky-way Crossing.

Unlike The Promised Rinascimento, this route really hits the ground running with an attack on Okabe, Maho and Leskinen early on by a seemingly insane religious fundamentalist. Honestly this story doesn’t have a whole lot of slow points as Rintaro has to spend a month in WWIII Japan trying to escape to Okinawa, and later converges with where the Steins;Gate 0 anime is. 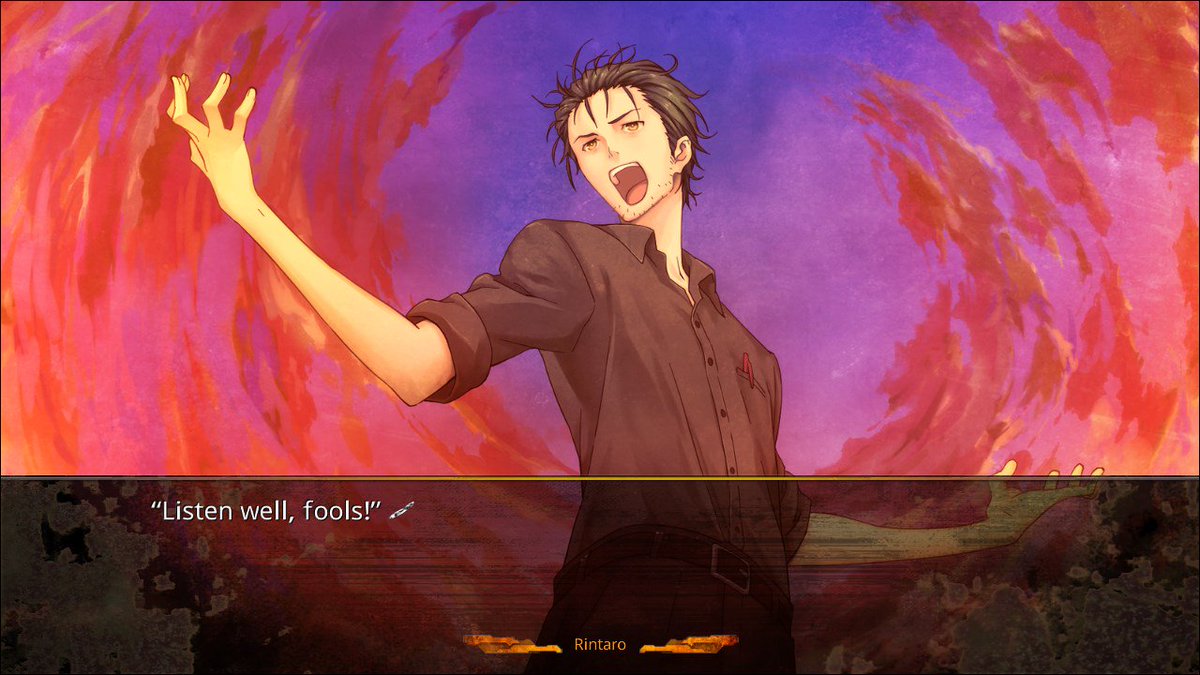 If you followed the above directions to this point and watched the credits of the Vega and Altair ending, you’ll see the Milky-way Crossing ending which shows the surviving members of the Future Gadgets Lab in the year 2025 — the year Okabe is supposed to die. However we learn that he once again attempts to deceive the world by using a prototype time machine to find Suzuha and Mayuri who disappeared in 2011 for Operation Arc-light. 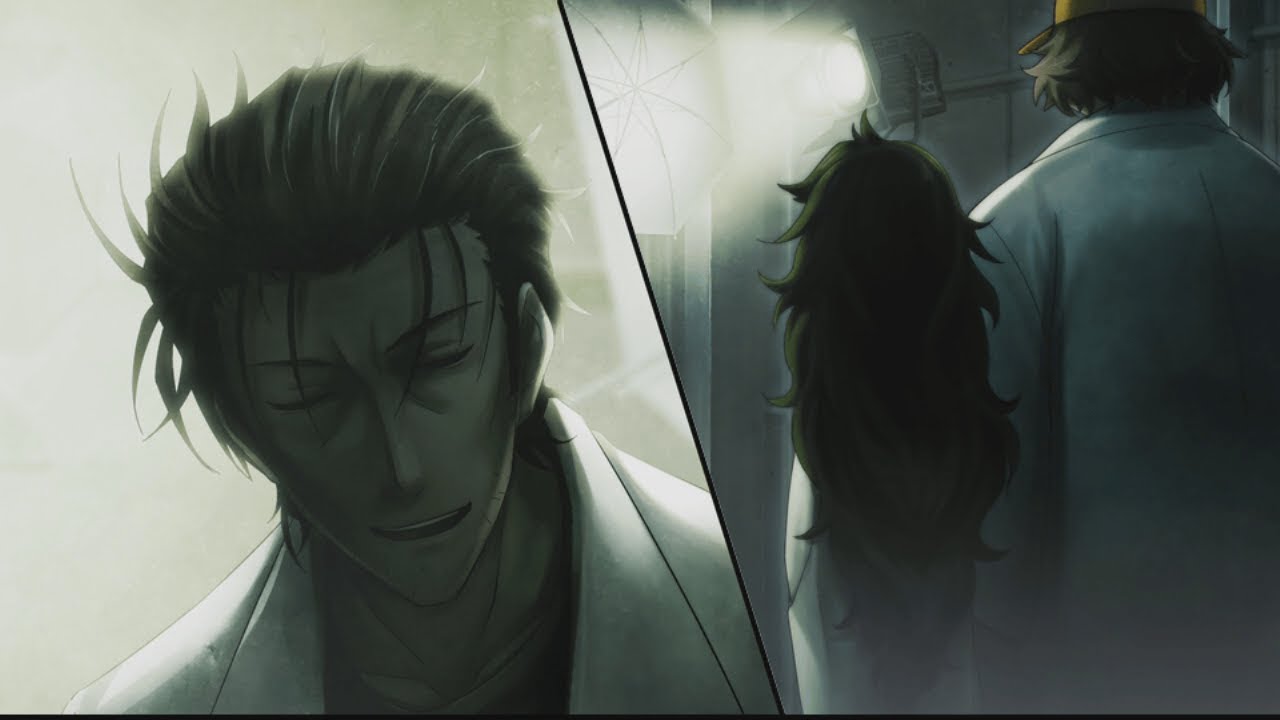 From this point on the routes are pretty similar until about midway through each game, so it’s good to have some strategically placed saves if you want to do all of the endings. Apart from the Bad Ending; Kurisu, Kagari, and Maho’s routes all have similar buildups which is kind of annoying and I think explains some of the negativity towards this game compared to the first. I can’t be sure since I haven’t played all of the original’s endings yet, but I get that impression from what others have written.

Kagari’s route has one of the saddest endings in my opinion. It seemed shorter to me than the others, but it hit me in the feels pretty hard regardless. Kagari was one of my least favorite additions in 0, and overall I found most of her story to be unnecessary. However when she chose to take Mayuri’s place in the time machine at the end I couldn’t help but feel really bad for her. And then when they play her song in the credits it just felt so bittersweet. I definitely wouldn’t recommend this as a main route, but they could’ve done worse.

So I’ll admit I didn’t expect much from this route in the beginning. After all, in my mind Maho and Kagari were both added as “extras” into the Steins;Gate universe to help push along the main plot. Oh how wrong I was.

Maho’s route proved to be one with the most surprising in terms of character development. Not necessarily for Maho herself but definitely for Kiryu Moeka — a character I’ve hated in practically every world line outside of the Steins Gate 1.048596β line. Not only does she open up more and speak outside of texting for a large portion of the story, but she actually becomes a bit of a hero in the end. Scratch that, she’s a total BAMF in the end! I’m actually glad I saved this route for towards the end, because I never knew how much I would appreciate the bond between Maho and Kiryu until I played this route.

Ultimately I would probably recommend this route as my second favorite behind Kurisu’s. Even though it’s not a straight path the Steins Gate, I think in a roundabout way all of the paths up till now are technically necessary to reach it in the S;G universe.

So last, but not necessarily least, is Gehenna’s Stigma which has been dubbed the bad ending for good reason. It’s only initial difference from Vega and Altair is deciding to answer the call from Amadeus, but that decision has some pretty drastic effects of the world line.

This route is garbage. Does it have some interesting moments unique to it? Sure. Is it the only ending where Okabe just gives up completely and end on just a god awful world line? Yeah. That’s why this route is irredeemable garbage and I hate it. Would only recommend to a masochist.

But finally here’s the path to the real ending Milky-way Crossing to help cleanse the pallet of Gehenna’s Stigma. I know I described it above, but I figured it wouldn’t hurt to include the actually guide here as well. I won’t bother reviewing it again, but I will say I love how it actually shows the recording of events we don’t see until the end of the original Steins;Gate.

2: Either start a new game or reload a file from before the Closed Epigraph episode since there’s a Rine message after the shrine scene that triggers the ending.

3: Continue playing the game by following the guide for Vega and Altair ending and finish the game getting this ending (the true ending will unlock after the credits are over, so dont skip them).

And that’s the review! If you made it this far I’d like to thank you for both your time and patience. I really enjoyed this game overall, and will likely be playing Steins;Gate Linear Bounded Phenogram next. If anyone is interested in finding a fan-translated copy of it, let me know and I’ll message you the details. I’m also considering Twitch streaming it soon if there are any interested in that instead. Just let me know, and again THANKS FOR READING!